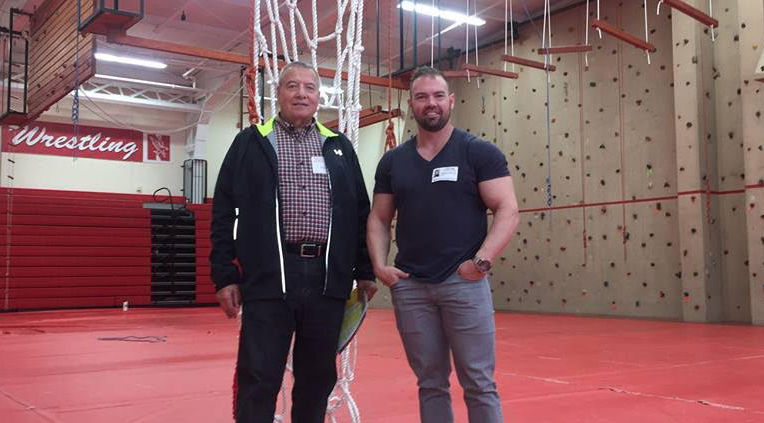 We left the hotel in downtown Chicago around 7am for a cold walk to the train station. People from Dallas are terrible at public transportation because we really don’t have any. Tawna and I were nervous about getting the correct tickets and leaving on time to meet Paul for our scheduled tour of Naperville ISD. Of course, there were train delays with unforeseeable solutions but we lucked out finding a one-way train out early. We just had to figure out how to get home in time for my afternoon participation in the Club Industry Panel – one hurdle at time!

I could hardly believe we were getting a personal tour from Paul Zientarski. Paul may not be a household name to all, but I had been reading about Paul’s work for years. In a very short summary, Paul was probably one of the most impactful PE Teachers of all time. Paul and his team and Naperville have led the charge of incorporating more movement into education and he is routinely booked around the world to share his methodologies and findings. If you want to learn more about Paul’s work, here’s a link to an excellent Ted Talk he gave: Paul’s Ted Talk 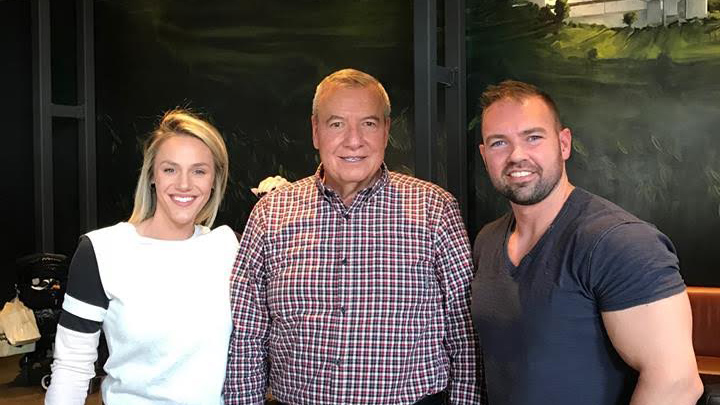 I became familiar with Paul after reading the book Spark by John Ratey.  John’s book is revolutionary, in my opinion, because he makes a solid case for exercise being the answer for many of life’s curable diseases like anxiety, depression, addiction, attention deficit disorder, aging, and learning disabilities. The capstone case study and opening story in Spark is about Naperville ISD and the work Paul and his team have accomplished there. Naperville attracted Dr. Ratey with their unusually high rankings in an international test called the TIMSS. At this time, the USA ranked 19th in math and 18th in science. Naperville actually registered as its own country and achieved rankings of 6th in math and 1st in science. Dr. Ratey went to observe what they called Zero Hour P.E. where children would show up before school and utilize heart rate monitors to do a cardio program designed to enhance their brain function as their first class of the day, which was strategically the class they were struggling with. The story is fascinating – I highly suggest reading the book.

Paul picked us up at the train station and after a quick intro and pointing out a few fun facts about Naperville during our drive, we pulled up to Naperville Central High School. Paul is now retired – but walking around the school, it’s obvious his name and impact on the staff there are still very real. Every employee we walked by had an endearing or joking remark to give Paul. Paul had a detailed agenda for us. We observed (and participated) in a math class that utilized “brain breaks.” Every 20-30 minutes, the kids would stand up and do a quick brain game that involved the arms crossing the midpoint of their body to stimulate both sides of the brain and usually some kind of reactionary thinking or tough thinking. For instance – we had to play Rock, Paper, Scissors in reverse. Meaning that participant one throws a signal and participant two must react by throwing a signal that would’ve lost had it been thrown first. We made our way over to a freshmen female weight training class. All of the girls in this class were participating in a circuit of weight training – carrying iPads where they would record their reps and weights.  The class ended with a cooldown and some light stretching. 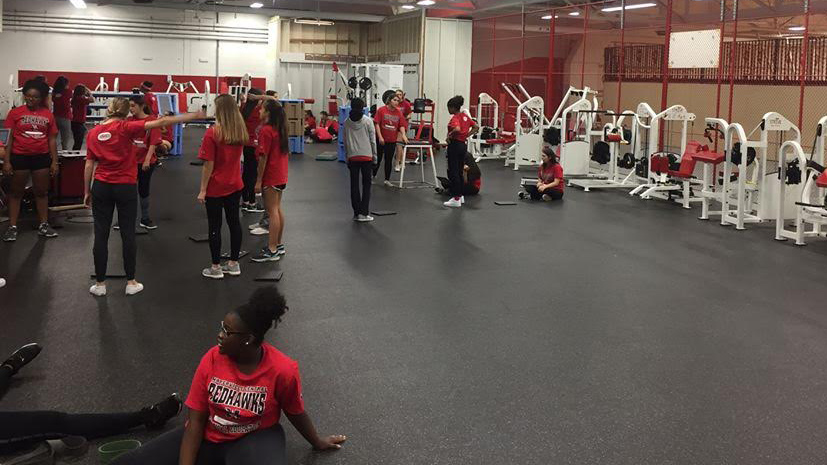 We checked out one of the school’s gymnasiums that had received significant investment from the community. It included a large rock-climbing wall and a suspended ropes course that you would see at a summer camp or leadership retreat. This is exactly what Naperville used it for – their student council and leadership teams got to participate in team building activities that corporate leaders pay thousands of dollars to attend. 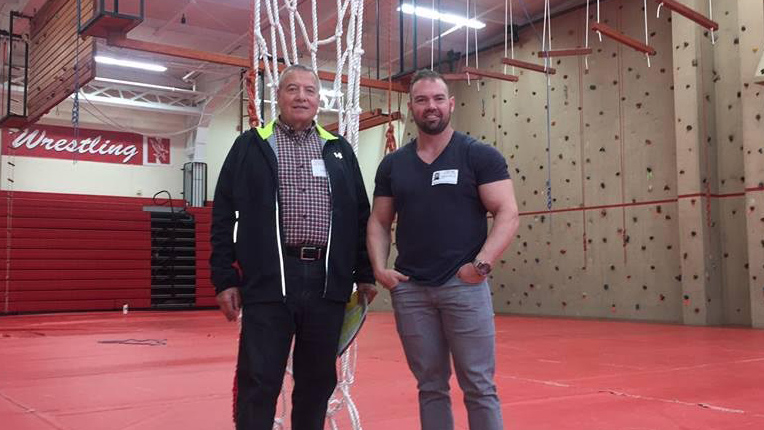 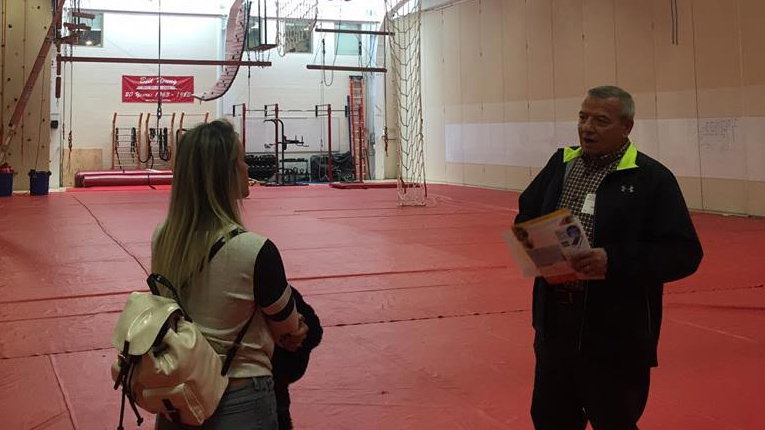 My favorite part of the tour was seeing their famous cardio class in action. We entered a room to the blast of a movie turned up loud. There were probably 50+ pieces of cardio machines in the room – all in use. All of the students were on a variety of cardio machines – all facing out, so they could do cardio and watch the movie that was playing. On the wall, there was a giant projector screen displaying the heart rates of every student. Each and every student was wearing a heart rate monitor. Their teacher had left instructions about how many minutes they needed to spend in the correct “zone.” It was up to the students to watch their heart rates and match their cardio pace with the number range they needed to stay in. 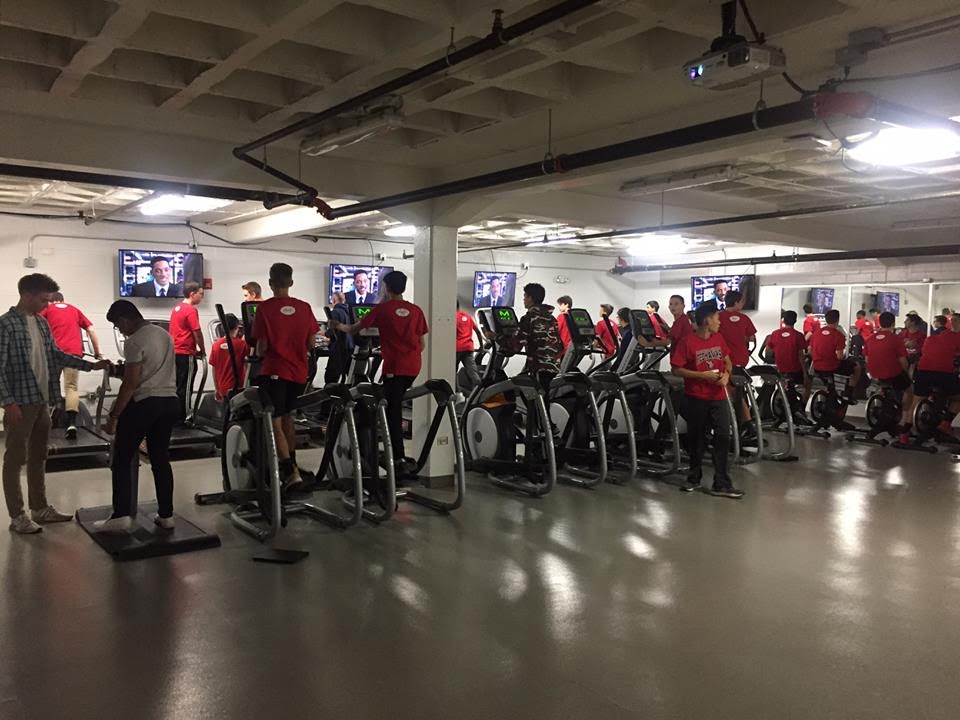 We didn’t have time to visit the pool where they do a variety of different exercise classes, including kayaking! It was important to me to have time with Paul to go through his presentation in hopes of learning what I could to bring back to Dallas. Paul took us to a local Starbucks and spent 90 minutes with us, walking us through the presentation he gives around the world. Paul provided plenty of inspiration and information in our six-hour visit. I wanted to be careful about how I asked him questions, as it’s likely I’ll never get to spend time with Paul again and I didn’t want to pick his brain about things I could learn in a book; I wanted wisdom. It was clear that Paul knew this information could make a serious change in the world, but in his wisdom, he advised me that I did not try to achieve change through the established school system. Reading between the lines, I could sense he had spent his career battling red tape and politics. Paul instead thought that my plan to work in the nonprofit sector was a good idea and that private afterschool programs were a great place to make change. I also left with the feeling that since Paul’s retirement, many of the things he had worked hard to put in place were already eroding. Education is something everyone takes very seriously but there are obviously different views about how to go about improving it. Exchanging study hours for physical activity isn’t always an idea that’s accepted and as more pressure mounts on teachers, principals, and school districts, adding more studying and more class time seems to be the approach that’s winning the votes. Thanks to people like Paul and John Ratey, there’s mounting proof and momentum that physical activity will enhance education, not distract from it.